Gliding is yet another opportunity for our cadets to develop their flying skills. Gliding is similar to powered flight except that gliders do not use an engine to keep them in the air. Instead they use thermals - pockets of rising air - to stay in the air. The two types of Glider used by the ATC are the Viking and the Vigilant. The Viking gliders are winch - launched, and have no engine. Takeoff in a Viking is exhilarating, with the gliders reaching their launch speed of around 60 Knots in a matter of seconds. Once in the air the ride is noiseless, and the glider can remain in the air for hours on end.
The Vigilant glider does have an engine, which is used primarily for takeoff. Once airborne, the engine can be turned off, the propellor feathered and the aircraft allowed to glide. This offers a similarly silent experience as gliding in the Viking, but there's always the knowledge that if you ever start sinking and losing height you can just turn the engine back on! 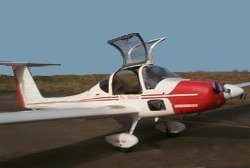 These two types of glider are flown from VGS (Volunteer Gliding Schools) across the country. The nearest VGS school to our squadron is located at RAF Woodvale on the coast new Southport. The gliders used as RAF Woodvale are the powered Vigilant gliders.

From the age of 16 a Gliding scholarship is available to some cadets. This may lead to a solo flight in a glider. Advanced Gliding Training follows for those with aptitude and will include soaring and more solo flights. Advanced Gliding Training will also enable cadets to become fully qualified flyers if they complete the training, and will enable them to enter further training in larger and more powerful aircraft.

Blue Wings are awarded to all cadets who complete the Gliding scholarship. This show that cadets have successfully completed the training and are competent with flying a glider.

If cadets show a certain degree of aptitude and skill during their Gliding scholarship, they may be offered the chance to stay on for a few extra hour's training with the end goal of a solo flight. If cadets are lucky enough to fly a glider solo, they will be awarded Silver Wings.

After completing a Gliding scholarship, cadets are offered the chance to continue their training further - called Advance Glider Training (AGT). This consists of more hours of training and successive solo flights along with Gold (AGT) Wings.